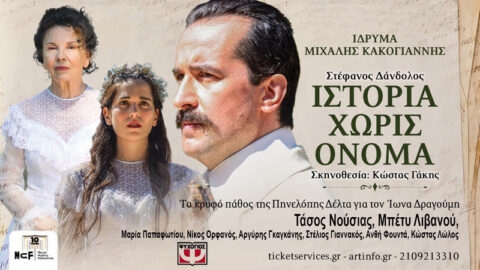 A STORY WITHOUT A NAME

The secret passion of Penelope Delta for Ion Dragoumis

The passionate love story of Ion Dragoumis and Penelope Delta will be transferred to the stage, this winter, by Costas Gakis in a theatrical adaptation of Stefanos Dandolos, who has been awarded 3 times the public’s prize for his book “ A story without a name” (Psichogios Publications).

The role of the emblematic  but controversial diplomat Ion Dragoumis will be played by Tasos Nousias, which is one of the most important actors of his generation.  Meanwhile, the exquisite Betty Livanou and the revealing Maria Papafotiou will share two different eras in the life of the great writer and historic figure, Penelope Delta.

June 1908 – Vienna/ Ion Dragoumis is present when Penelope Delta takes a defining decision regarding her life.

April 1941 – Kifisia/ Ion Dragoumis is absent from the life of Penelope Delta yet more present than ever.

Ion Dragoumis and Penelope Delta. One soul separated in two bodies. A hidden pain that was never unwound.  Two connected sobs. The love and the country.  A tale of pleasure and despair.  The emblematic diplomat and the remarkable writer in an imagined life of wishes, dreams, high ideals, commitments and visions.

Writer of the play “A story without a name”: Stefanos Dandolos