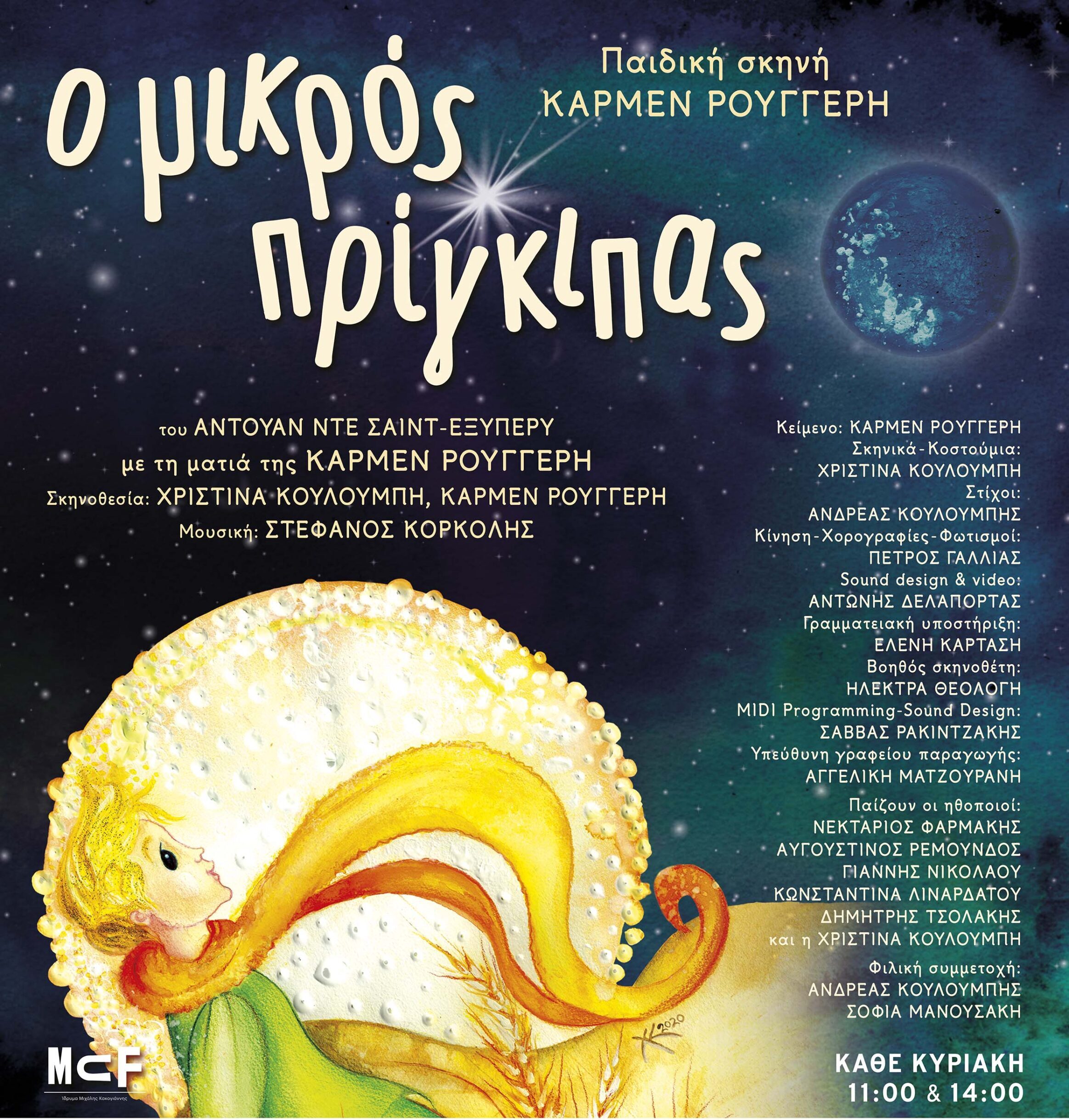 “THE LITTLE PRINCE” by Antoine de saint-exupéry, “through the eyes of Karmen Rouggeri” &  “original music by Stefanos Korkolis”

The KARMEN ROUGGERI children’s stage this year is presenting at the Michael Cacoyannis Foundation, from Sunday, October 17, the performance, “THE LITTLE PRINCE”, a play that, as always was voted for by the children themselves.

This masterpiece of world literature, which for years now has enchanted all ages, is turned into a performance for the entire family, in a text by Karmen Rouggeri, directed by Karmen Rouggeri and Christina Kouloumbi.

The costumes, the sets, projections and choreography are all, as always, meticulous in detail.

The original music and songs were inspired and composed by Stefanos Korkolis, with lyrics by Andreas Kouloumbis.

With a sense of responsibility and placing absolute priority in the safety of our spectators, actors and technicians, we will strictly implement the health protocol so that we all remain healthy.

It should be noted that the ventilation at the Michael Cacoyannis Foundation is in accordance with all European and international directives.

A few words about the performance:

It has the form of a fairytale and its plot is fictional.

It is the story of a pilot who, after a plane crash, is forced to land in the Sahara.

There he will meet a little boy, the LITTLE PRINCE,

who will tell him a story.

He will tell him about his planet.

And  his travels to other asteroids in space.

About his flower that he loves so much, but also

about his friend, the fox.

He will even talk to him about the human types

he met during his trip.

About the king who constantly gave orders.

And the vain man who wanted to be applauded

About the drunk who was ashamed because he drank.

And a businessman who believed that all the stars

About a lamplighter who worked non-stop.

And a geographer, and a stationmaster.

Through each one of these encounters he will take life lessons.  And from the words of the fox he will come to understand that:  ONLY WITH THE HEART, only with love, that is, CAN YOU TRULY SEE.  BECAUSE THE EYES CANNOTE SEE ESSENCE.

Spectators, including minors from 12 years of age upwards may enter following a mandatory demonstration of the following:

a)  certificate of vaccination, in accordance with par. 2 of article 10 of sub-no. 1, or

b)  certificate of recovery issued thirty (30) days after the first positive control with validity lasting up to one hundred and eighty (180) days following, according to par. 3 of article 10 of sub-no. 1

c)  Police ID or driver’s license or passport or other proof of identity in order to carry out an identity check on the above under (a) and (b).

The above certificates (a) and (b) are displayed either in printed form, electronically  or via mobile app, which the owner or legal representative of the company (or authorized person) scans electronically through the special application of article 33 of law 4816/2021 (A’118) Covid Free GR.

Alternatively, for foreigners from a third country (outside the European Union, the persons of the previous paragraph,  check the above certificates in hard copy.

Minors aged between four (4) and eleven (11) years of age may submit a self test statement of the last 24 hours, performed by either a parent (custodian or not), or guardian, in accordance with par. 3 of article 10 of sub no. 1.  No physical presence is required by parent or guardian.