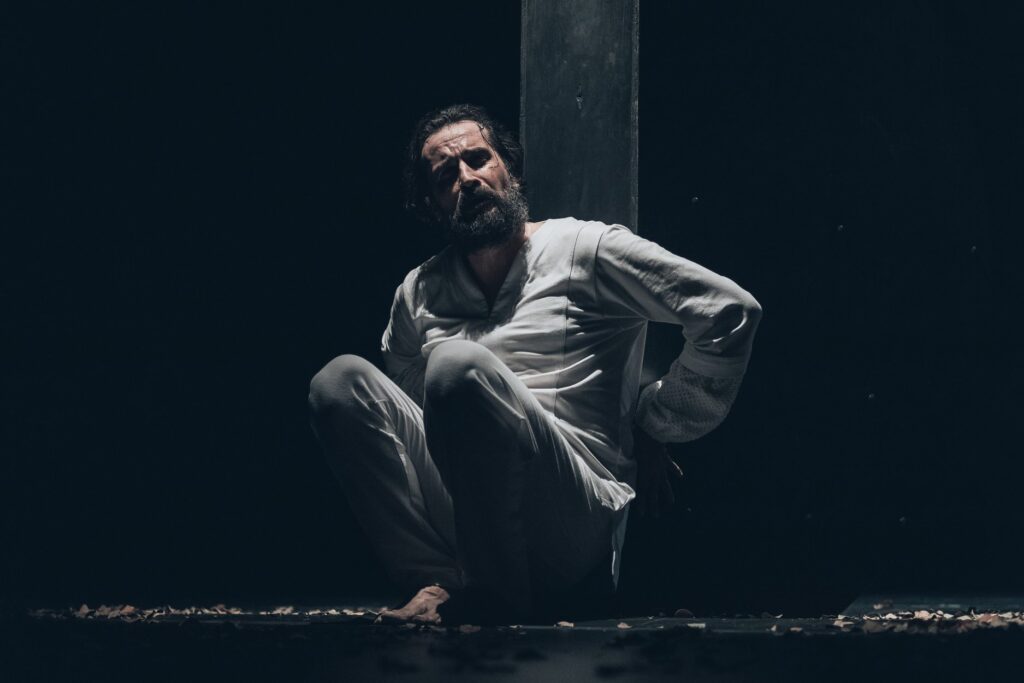 Performing: Tasos Nousias in the role of Richard II
Alexandros Philipopoulos and the voice of the queen by Mary Milolidaki

Brief summary:
Richard II was amongst the most enigmatic of British kings, the story of whom Shakespeare turned into a deeply moving, enthralling study of a tragic hero and poetic soul.  The play “Richard II – Requiem of a King” is a condensed version of “Richard II”.

Beginning at the end:  Richard has lost the throne to his rival Bolingbroke.  Imprisoned and stripped of his rank and privileges his existence is now one of utter darkness and solitude.  That is until  an unexpected visitor appears at his cell, rousing him from his oblivion.  The visitor claims to be his former groom and gives cause to the fallen king to look back upon the days of his glorious  past and to contemplate his dismal present.
Voices from the past start to surface into his consciousness as hallucinations take over his tiny cell.  As Richard faces up to the reasons for his decline and deposition, we watch him teetering the thin line between delirium and clarity, self-doubt and arrogance, humour and self pity.

The visitor, who appears to have a mysterious power, exhorts Richard to face not only his mortal, but also his ethical, hypostasis, head on. And so now, he seeks the answer to one last question which is perhaps the most important of all:  “Now that I have lost everything, who am I?”

Shakespeare has managed that which few playwrights throughout the world have managed:  to translate, through his stories, the internal drama which plays out during the spiritual journey of his characters.  His works are not only concerned with the function of human existence but can also be interpreted as sacred, dreamy, mystic even, perhaps.

The performance has been a work in progress and is to be presented, renewed, with additional elements, in its final form.