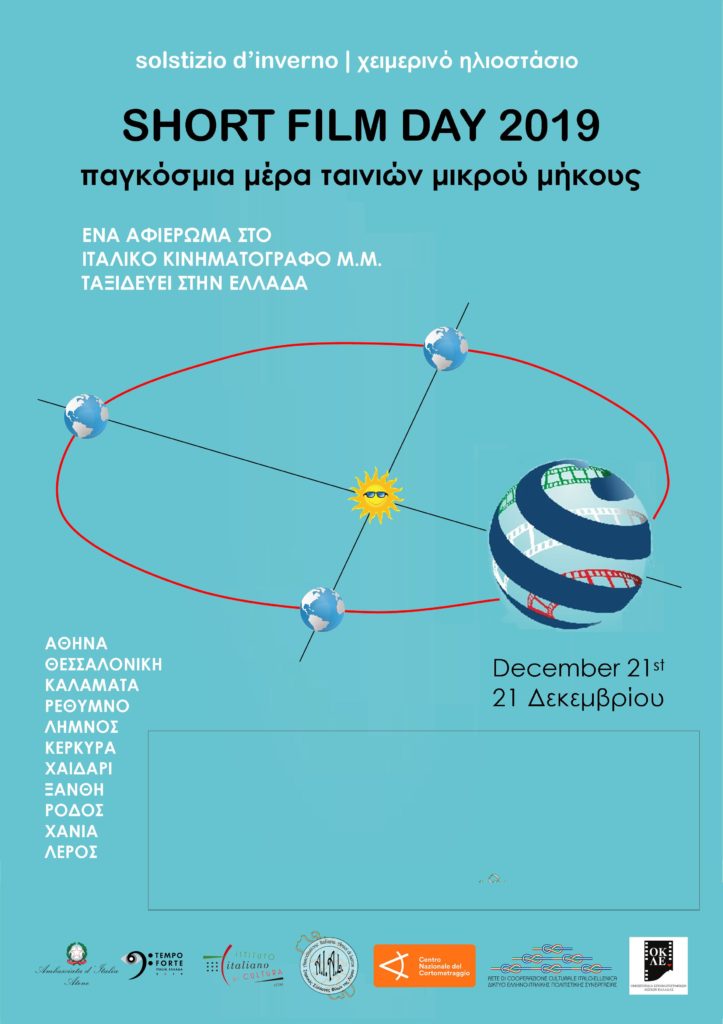 On the occasion of winter solstice, the shortest day of the year(December 21 for the North Hemisphere) became a perfect opportunity to celebrate short film. The idea came up in 2012 in France and since then INTERNATIONAL SHORT FILM DAY gathers short film enthusiasts in more than fifty different countries all over the world.

The Italian Short Film Center provides for the event to the Italian entities all around the world, a short festival (duration: 88’) with 6 films of recent Italian productions in a selection of different film genres: narrated, science fiction, animation.

The Culture Association AIAL did the subtitling of the films in Greek and supports this Festival for the promotion of the Italian Cinema in Greece via the Greek-Italian Network of Cooperation on Culture with the support of Italian Culture Institute of Athens in 11 cities. In Athens it takes place at Michael Cacoyannis Foundation at 19.00 in collaboration Greek Federation of Film Clubs

This event is part of the initiative Tempo Forte Italia- Greece 2019 by the Italian Embassy of Athens. A leaflet with the descriptions of the films will be available for the audience.

In a world where nature prevails, a man and a woman live their lives as the last survivors of their species. Working as farmers, they deal calmly with the fatigue, the silence, and existence. Driven by the desire to escape, the man finds refuge in his imagination. He explores abandoned villages, scavenges for junk and designs improbable flying machines. The woman watches him from afar but staying at his side with the care and the self-sacrifice that someone would offer to a madman. At least until something falls from the sky, breaking into their lives. An unexpected guest will force them to wonder about themselves, about reality and desire, and the act itself of imagining.

The Bonanno family lives in the outskirts of Palermo. Annachiara, only child, has just broken up with her boyfriend and she is waiting to see him for the last time, because, according to an old habit, when a love story falls apart, the ex-lovers use to give back the engagement gifts. She is trying to persuade him to change his mind but her grandmother has the solution. An ancient spell she knows will safe this thwarted love.

Exhibition: A sign in space. That’s how the news is presented at the newspaper and it gets the attention of mister Qfwfq that is seated at a small table in a bar. The retrieval of the primitive symbol provokes a storm of memories, a flashback about the creation of universe. Mister Qfwfq is not getting upset but he wants to check that this sign is the one lost million years ago, in order to be sure. However, this discovery may have as a result to bring the original condition: Before Mister Qfwfq’s sign, space didn’t exist or it had never existed.

The town is quiet. Only the breaths and a few dogs barking win the silence. Men, women and children, all suddenly fell in a permanent sleep. Two young boy scouts sheltered in a church are the only ones still awake in a sleeping world.

Black tells the story of Matteo, a young electronic music producer that realises that he can’t play music anymore because of a long blackout. While the city quickly adapts to the new situation, Matteo somehow manages to overcome his loneliness thanks to his neighbour Greta, a writer who makes him rediscover the pleasure of simple things.

Davide is a frustrated teacher who lives with his wife and son in a quiet apartment building in the suburbs. He is a creature of habits with an uneventful life. His daily routine is disrupted when one of his neighbors welcomes a homeless man in the building’s courtyard. All of the residents start caring for him, as he seems to fill their lives with pure joy, yet without ever uttering a single word. Davide, too caught up in his own miserable life to welcome such a change, starts harboring a deep hatred for the man and tries to get rid of him, with scarce results. Eventually, as his wish comes true, the disappearance of the man will have unexpected effects.