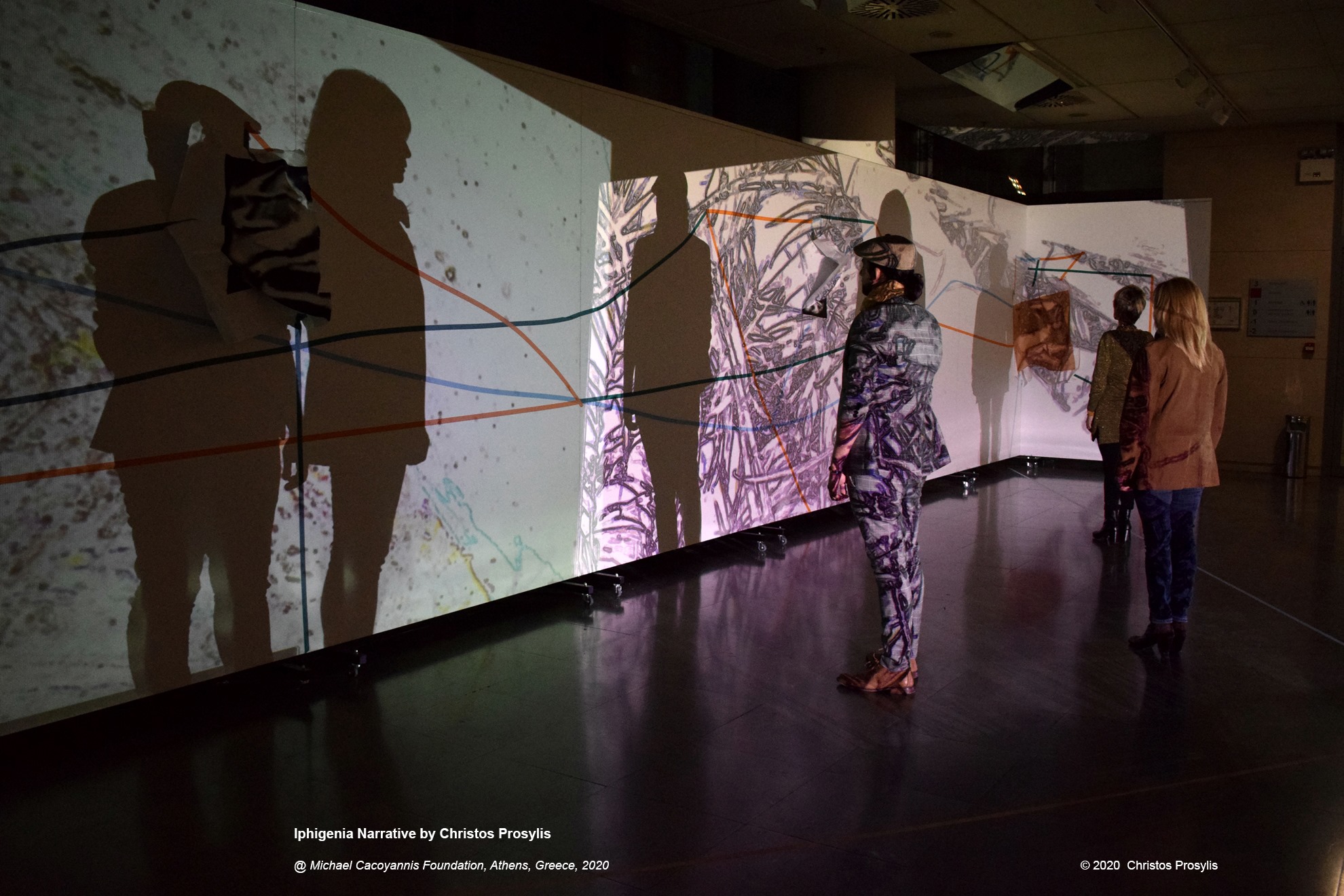 In the Foyer 2nd floor of Michael Cacoyannis Foundation

The new art project “Iphigenia Narrative” is inspired by the metaphysics of the myth of Iphigenia, as described in ancient Greek tragedies and other ancient Greek texts. Christos Prosylis transforms the foyer of the second floor of the Michael Cacoyannis Foundation into a crossroads between everyday life and the digital world of a cross media art project (video art installation, sound art etc). The spectators thus become part of the play every time they absolutely naturally cross the space, for their transition from the everyday world to the “theatre”.

The work functions in this way, as an intermediate station, as a spatial and temporal commentary on the metaphysical moment of Divine intervention, which replaces Iphigenia with a deer before its sacrifice. After that, the interpretation of the omen by the priest is that, in the end of the day, the sacrifice was not needed.

Right there, the work with the participation of the public, allegorically transfers the myth to today’s daily life. There are the moments when we “must” “sacrifice” the our “internal” self, with the hope that in this way “we will bring new air” to stop the “apnea” in our lives.

During the transition through the installation of the art project “Iphigenia Story”, from the natural outside world to the “theatre”, the viewer has the opportunity to observe himself as a shadow and image together in the video work, to listen to the space and the time, to gaze at the shadow of himself within the space-time continuum of the work, and to consider his own Narrative as a modern Iphigenia.

Christos Prosylis is a film / theatre director, new media, video and performance artist, actor / & writer. He is poet and philosopher as well. Christos is based in London, UK, and Athens, Greece. He studied acting and film directing. He studied also Theatre Studies at the Philosophical School of University of Athens, Greece. He holds a Master’s in Digital Arts by Athens School of Fine Arts, and National Technical University of Athens. Christos is expert in the field of the Technology in Directing. Very much experienced, since early ’90s, he has a strong background in film and theatre acting and directing and fine arts, including in his experience a lot of theatre performances, films, video art installations, documentaries, art projects, performance art, new media art and digital art. Christos is the founder of the Acting Code advanced acting and directing technique [Grand Master]. He is the founder and Director of the London Greek Film Festival, as well as of Cosmocinema and Cosmotheatre theatre research group.