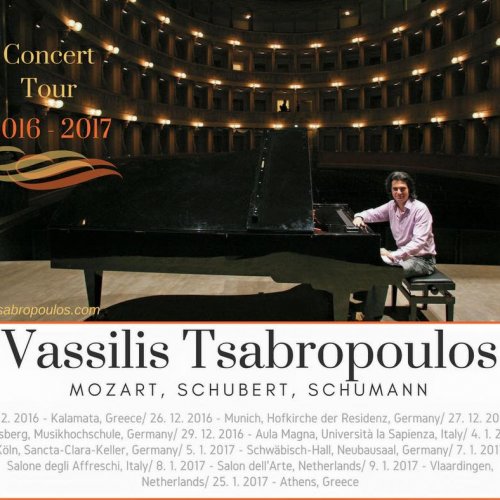 The internationally acclaimed concert pianist, conductor and composer Vassilis Tsabropoulos performs some of the greatest piano works of Mozart, Schubert and Schumann, in his new European tour in Germany, Italy, Netherland and Greece.
Vassilis Tsabropoulos was introduced in the international scene mainly as a composer through his deeply imaginative and intellectual music for piano, recorded successfully since 2000 by the German label ECM records and he has toured in Europe several times playing concerts. His unique solo piano releases, “Akroasis”, and “The Promise” are inward-looking albums and “Chants, Hymns and Dances” an international cross-cultural success. As The Times wrote: “Tsabropoulos is one of those rare musicians who is equally at home in both the classical and the jazz worlds”. Vassilis Tsabropoulos once described the making of different kinds of music as an aesthetic imperative, a conviction embodied in his ECM discography.

A prodigy, was winning music competitions from the age of ten, and after graduating from the Athens National Conservatory, continued his studies on an Aristotle Onassis Scholarship at the Paris Conservatory, the Salzburg Academy and the Julliard School. Tsabropoulos was an early achiever, winning the UNICEF competition. His distinctions and awards are too many and many are his collaborations with orchestras in Europe, performing an ever-expanding repertoire in both recitals and concertos. He has taken the stage with Europe's several important orchestras including among others the Philharmonia Orchestra, the Stockholm Philharmonic, the Baltimore Symphony Orchestra, the Czech Philharmonic, Budapest Chamber Orchestrate, Sofia Philharmonic, Italy Radio Orchestra etc. His repertoire varies from Bach to Beethoven and Chopin to Prokoviev. As a pianist he is highly effective in Russian music, particularly in Rachmaninoff. He has made his first USA tour in October 2004 with a significant critical and popular success. Pick of his career is his performances with London Philharmonia and Czech Philharmonic Orchestra, under the baton of Vladimir Ashkenazy in piano concertos of Beethoven and Rachmaninoff.

Part A
W.A. MOZART
I. Piano Sonata No.8 in A minor, K.310
i Allegro maestoso
ii Andante cantabile
iii Presto