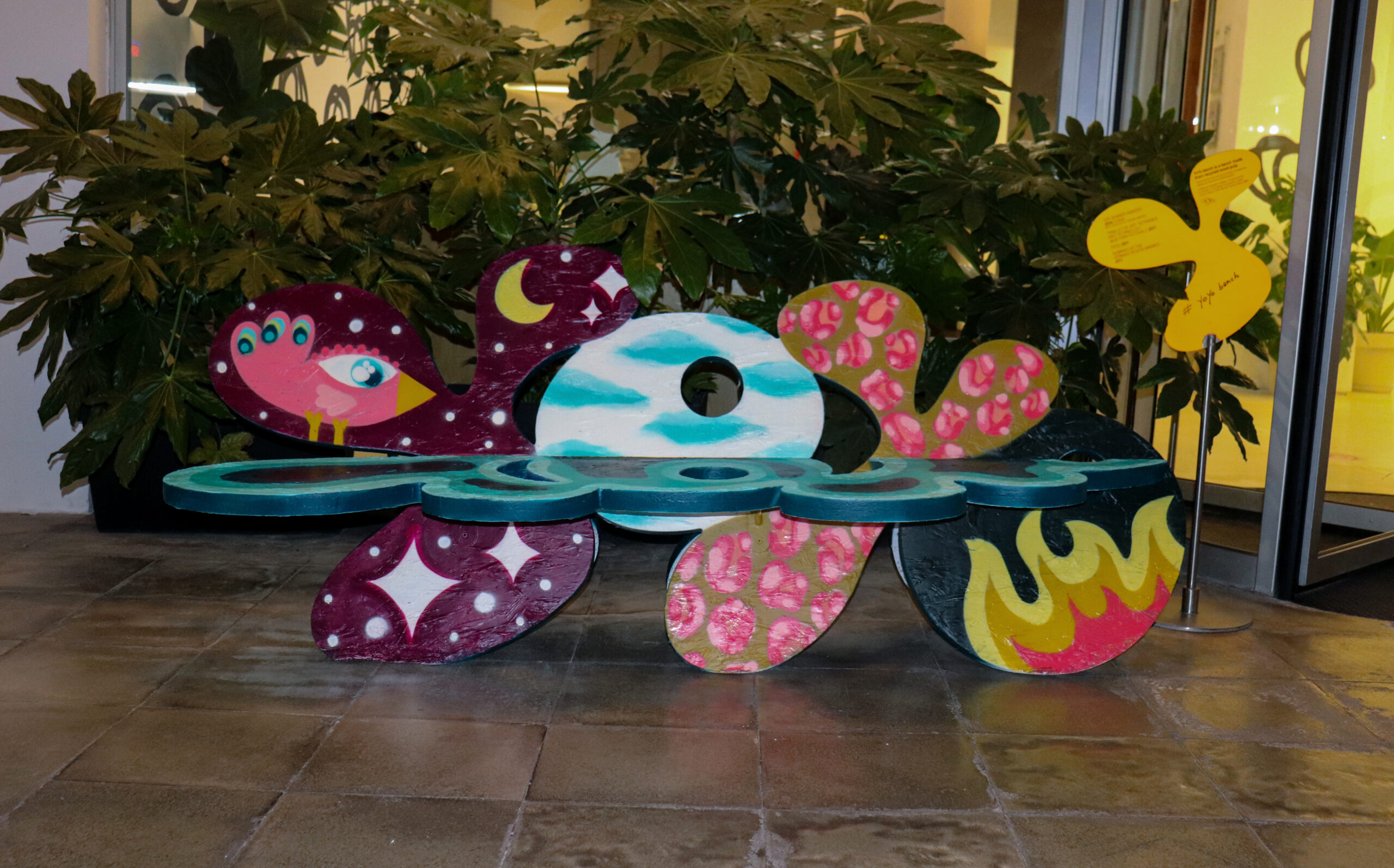 A live grafiti session took place outside FRESH HOTEL in Athens on Wednesday October 6, where grafiti
artist UNEG painted on the spot the YoYo eco bench. The process was filmed and accompanied by a live DJ
set.
We would like to thank UNEG, Christine Grec and Odydoze for their collaboration and creative spirit,
FRESH HOTEL and MICHAEL CACOYANNIS FOUNDATION for the continuous support and hospitality.
What is YoYo?
YoYo bench is an everyday object inspired by the contemporary life of the world citizen, with global
distinctions. The design is based on letters that form the word YoYo.
It is a creative abbreviation of the word You, which is at the same time a youthful greeting (Yo).
The word is read both face on and from above. YoYo bench is made of compressed wood pulp.
YoYo is an awarded bench with ecological awareness, it is fun and with a creative spirit.
It is designed by Rodanthi Senduka, creator of the Emblem of Olympic Games Athens 2004, and Head
Creative Director & partner of Red Design Consultants. The bench began through the *etsi platform for the
environment in 2010. Since then it has won 5 international and Greek awards for its design.
Winner at 2010 China’s Most Successful Design Awards
Finalist at New York Festivals 2011
ΕVGΕ 2011
Nominee at German Design Awards, 2012
Silver Award at A΄Design Award, 2013-14
It participates in the city of Athens in different places, such as MCF, K44 / ORGANIZATION Earth, FRESH
HOTEL, Red Design Consultants and at ΤΑΤΟΪ Club, especially dedicated to children.
The following artists have participated and painted the YoYo bench :
HARRY LAMBERT, Christine Grek, Jimmy Carbo, K.Gkikas & Alex Chien, Giorgos Sirigas,
Artemis Katsampani Elli Vizantiou & Rodanthi Senduka.
YoYo bench has collaborated already with artists of different disciplines such as:
film maker George Panoussopoulos, architect George Tsivolas, Chef Bill Sarellas and architect/photographer
Costas Spathis.
YoYo concept has also collaborated with the following organisations : ORGANISATION EARTH, MINISTRY OF
ENERGY & ENVIRONMENT, CHINESE EMBASSY in Athens, INTERNATIONAL THESSALONIKI FAIR,
INTERNATIONAL HELLENIC UNIVERSITY in Thessaloniki, PLATFORMS PROJECT at the School of Fine Arts in
Athens under the scope of ATHENS STREET ART FESTIVAL.
.
We would like to extend our gratitude to all collaborators and friends for their love and support.

A few words about UNEG
Erick Sandoval Hofmann (UNEG) is a Mexican grafiti artist and graphic designer. He is a graduate of Escuela
Nacional de Artes Plásticas from UNAM. He is characterised both by his colourful style and creation of short
stories with a sharp sense of humour through the use of fantastical characters, that spring out of the artist’s
personal experience and subconscious. UNEG has worked on several projects for: Formula 1, NFL, NBA,
Disney Pixar, Tim Burton, and more. He is the founder of Neuroblasto Magazine and editorial director at Eter
Magazine. He is active with Global Street Art, the leading Street art platform.
On the decks of the live DJ Set at FRESH HOTEL was the 18-year-old up-and-coming producer Odydoze from
Athens who has collaborated for the past 2 years with some of the most important names in the Atlanta rap
scene. In total he has more than 500,000 streams in his tracks and very recently has reached No. 23 on the
US charts with Johnny Cinco’s album “iSwear 3”